Today was day three in the studio with Rich (engineer), Wolf (drums), and Frances (bouzouki) and we had an incredibly productive day. Just like yesterday it took us a bit more than an hour to get rolling again but once we did it was tune after tune of useful takes. These last three days have been drum-intensive and now it’s time for Frances and I to do some more recording of our instruments.

One of the things to remember is how to keep all our options open and that goes for the endings of the tracks too. In order to do that we want to let the natural ring of the bouzouki flow into the microphone at the end and not cut it off too early. The studio is so quiet and the mikes are so good that they can catch that “sustain” for a long time!

Evidence: one video of Frances tracking the end of our An Dro set.

Today was the first day I published anything about this webpage. I’ve got some good photos and videos of various parts of the studio experience. Some of them are a bit intimate because they show the making of the recording and some of the process, including our imperfections, but I figure, hey we already have your money so I might as well show you the real inside! 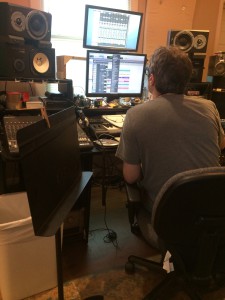 Here’s a picture of the owner of Ace Recording Studio and the best guitar player I have ever seen, Rich Brotherton. He’s produced for Ed Miller and Robert Earl Kean and he has been working very hard for us the last few days. He also introduced us to the best Mexican food in all of Austin.

We’ve got excellent percussion from Wolf Loescher on 14 separate tracks now and a couple of them were things I have never released on a CD but are great traditional pieces. I love being able to get to so many different types of tunes.

Here’s a clip of what Wolf has been up to the last few days:

I think I might have a little bit of footage for a music video at some point and I’m going to keep taking pictures and updating this as much as possible.

Thanks a lot for your support!

This site uses Akismet to reduce spam. Learn how your comment data is processed.