I’m so grateful for the opportunity to perform these past two years in the Piper Jones Band, and for the support the festival has given to my group and other excellent local groups like Will MacMorran, Four Leaf Peat, and Glen Ayr (Good Times Ceilidh Band).

I’m so grateful for the success of the past year and your excellent work keeping up the attendance and managing a festival that has been so wonderful and easy to work with.

Here are 4 proposals for next year:

1- Propose moving the St Andrews stage events to a platform to one side of the Edinburgh stage, moving the musician sales to the parking lot edge of the tent, and keeping the sound-tech side of the stage as-is. This will enable the sound crew to have 30 min changeovers, give the audience some interesting and refreshing programs, and increase the audience for the excellent St Andrews programs. The two stages could even interact a little as there would be ample time with intentional content being presented.

2- Propose moving the Dance event to the field where the Glasgow stage was, where they will have plenty of space and become a very visual presentation able to be seen from the road and the rest of the festival.

3- Propose moving the Glasgow stage event to the big red tent in the center of the vendor area. It is the same size red tent as on the field and will provide great draw for the vendor area, great exposure for the stage events, and great entertainment to the folks in the shade eating their food. The stage could host duo/single acts that can easily turn over. It’s possible with hiring thoughtful, considerate performers, and intentional scheduling, to run the Glasgow stage with almost instant turnovers, or set up the whole lineup as one scene on the sound board, allowing performers to just step up to the mic. Yes it’s a crowded tent but only as crowded as you would expect for a great music stage.

4- treat the Saturday night Ceilidh as a special performance rather than a continuation of the previous day. 7 Nations would play one show with North of Argyll opening.

Here is my proposal for a sample entertainment lineup, minimizing stage turnover by using 30 spots for solo/duos or St Andrews presentations held on an adjoining platform.  To avoid a conflict of interest this lineup does not include my group for 2023:

new groups:
Strathspan or the Reel Sisters: duo acoustic group that can turn over quickly
North of Argyll: up and coming wonderful and powerfully inspiring rock group
Ed Miller: balladeer from Edinburgh
Chambless & Muse: backing band to Ed Miller and wonderful duo in their own right

Proposed 2023 SMSF Schedule INTERNAL USE ONLY 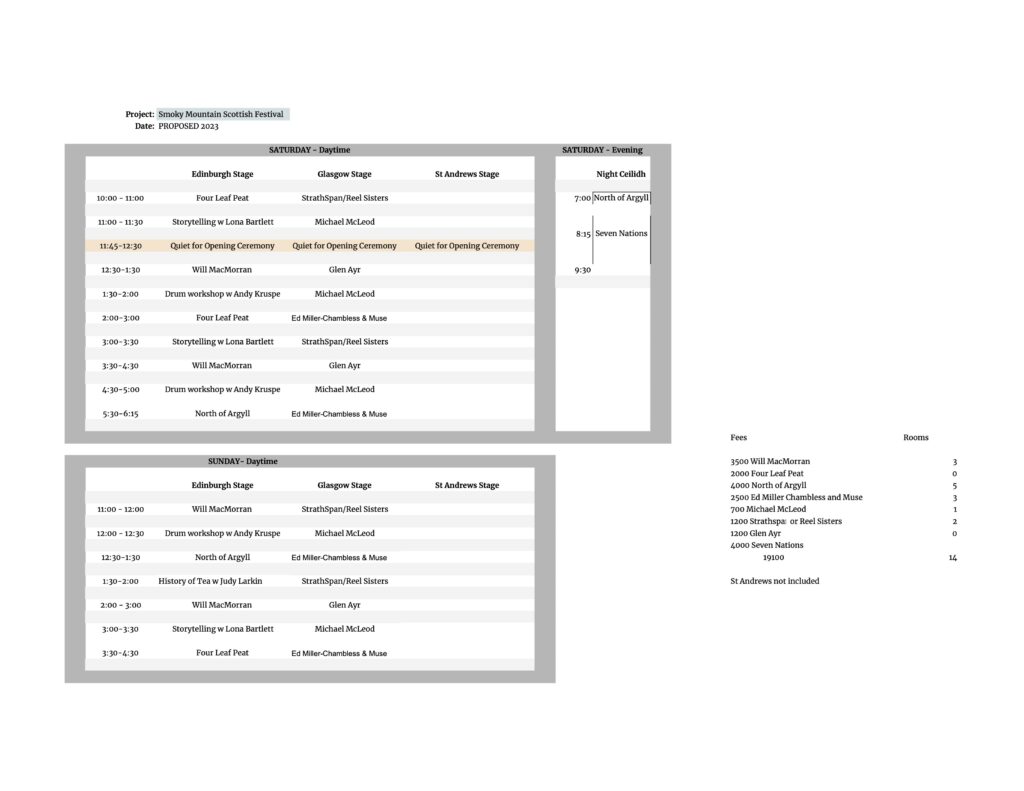 It has come to my attention that my role as music director is seen as being held in conflict of interest and I believe in the principle that it’s important to avoid financial conflicts of interest.

Here is where the money went that I received from SMSF in 2022:
3500 for Piper Jones Band performance
-1000 percussionist Wolf Loescher who also played as a balladeer in the lineup
-500 Alex Stewart who played Bass drums in our set
-500 Rachael Rodgers photographer who took professional photos of the entire lineup
-750 Frances Cunningham who played bouzouki on Edinburgh (w Piper Jones Band) and Glasgow (w Colin Showmaker) stages
750 remainder to EJ Jones
-575 publicity by Foxbriar Media facebook and video campaign specifically for Will MacMorran’s performance in connection with SMSF.

I’m sorry I can’t be with you today as I’m teaching at the North American Academy of Piping and Drumming just 2 hours away in Valle Crucis NC. As a piper raised up competing at Highland Games throughout my childhood in the late 80’s and 90’s I was given the charge by my teachers to continue the Scottish piping tradition, and I’m one of many pipers who have made a career taking the pipes from the competition field to the stages as general entertainment. I love the Scottish music that I was exposed to by the bands coming out of Scotland in the 80’s and 90’s pre-BRAVEHEART, bands that were touring the world and using the skills of competitive piping in rock and rock shows. Some of those bands are still around, like Skerryvore, the Red Hot Chili Pipers, and their American cousins 7 Nations. Loving the tunes and songs of Scotland and the great performers I’ve seen makes me want to see more of it in the future and so I’m concerned about the next generation of American students learning the music with enough skill that they can contribute their own creativity to the long line of professional musicians who came before them.

Will MacMorran is a once-in-a-generation performer/teacher who has come of age right in the backyard of SMSF. I have no financial interest in lobbying for him. Yes he plays pipes I made but he bought them secondhand, and yes it would be good advertising except I’m not making pipes right now and not taking orders for them.

Here is a video of Will playing last weekend July 9, at the Grandfather Mountain Highland Games Saturday night concert where I am the music director with latitude to do all the hiring: SAT NIGHT WILL MACMORRAN GMHG 2022

In 2022 I gave $500 to Rachael Rodgers to help defray her travel expenses on her trip to SMSF where she did us the favor of taking pictures of the lineup and some of the festival.  Those pictures are available here and if they are used please just give Rachael credit.

I have tried to make the Piper Jones Band available to the festival in as many ways as possible and we are available to play in 2023 or any time in the future.  I am available to be your music director on a paid basis or as a volunteer if you will allow me to implement a program of music hiring that draws up talent from the youth and brings in acts to inspire them, as I have been doing for GMHG for the last 9 years to great success both commercially and culturally, and would love to do in TN.